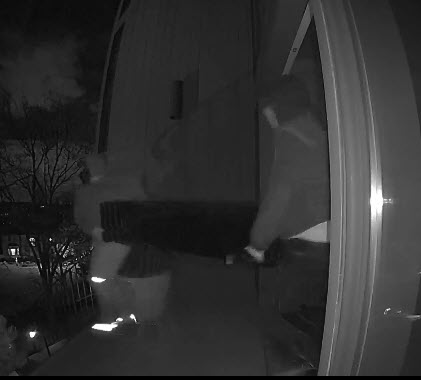 The incident began on April 16th, 2020 at approximately 9:30 PM. Cedar Grove Officers responded to an Eileen Drive Residence on the report of an activated intrusion alarm called in by central station. As Cedar Grove Officer Connor Grawehr responded he noted a white mini-van traveling on Route 23. When Officer Grawehr arrived on scene he observed that the front door had been forced open. Simultaneously the resident, who was away, notified police his door bell camera had captured three masked males entering his home and remove property. The assisting units were advised of the forced entry and the possible suspect vehicle description. That information was transmitted to surrounding towns and a perimeter was established around the home. Verona and Little Falls Police Departments assisted. Checks for suspects inside were negative. The master bed room had been ransacked. Taken were two firearms and jewelry. The doorbell video revealed the three suspects wearing masks and gloves removing the property from the house. Additional video from neighbors revealed a suspect vehicle, a white or silver mini-van. The suspects were undaunted by the sounding alarm spending only minutes inside the home. The investigation is ongoing. This is the second incident occurring in that neighborhood this month. Extra patrols have been directed into that area. Anyone with additional information or surveillance video please contact Det. Sgt. Robert McDermott at 973-239-4100 X258 or by e-mail rmcdermott@cedargrovepd.org.

Understandably we are all a bit distracted by the current crisis. However please stay alert. Report all suspicious activity immediately by calling 911. Never investigate on your own and do not dismiss your suspicions. Attached are two images in an attempt to identify or locate additional evidence.